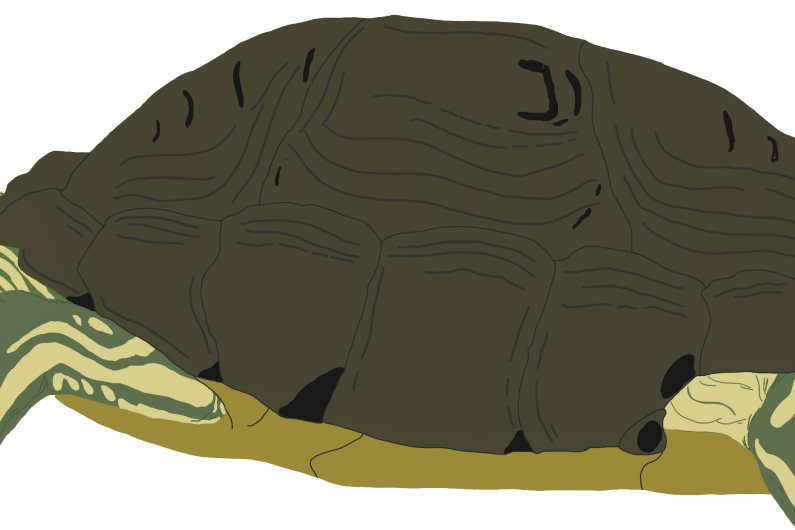 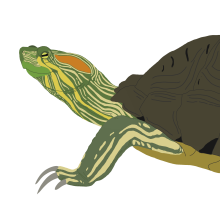 Like modern-day pond turtles, these sliders could walk on land, but spent most of their time in the water. Gray Fossil Site turtles would have found shelter, raised their young, and hunted for food in the ancient pond of Gray. Slider turtles are some of the most common animals found at the Gray Fossil Site, with dozens of fossilized shells discovered. This is good evidence that this was a great habitat for these animals. If you could go back in time and visit the ancient pond, it would be full of turtles!

Since they are reptiles, turtles can’t generate a lot of body heat, so they bask in the sun to stay warm. Pond turtles often crawl up onto logs to do this. Pond turtles need plenty of water and warmth, so they typically live in parts of the world with warm temperatures and medium to high amounts of precipitation.

These slider turtles had plenty to eat. Fossils from the Gray Fossil Site show that the pond was home to many small animals, including insects, fish, frogs, salamanders, and snakes, all of which could become food for a hungry turtle. There were also many types of plants that grew in and around the water, so turtles had lots of vegetation to choose from, too. On the other hand, turtles were liable to become food for larger predators at Gray, including birds of prey, snakes, other turtles, pandas, and alligators. One fossilized turtle shell has been discovered with alligator tooth marks, so we know these turtles had to watch out!

There are many species of slider turtle that live today in the wetlands of North, Central, and South America. In East Tennessee, where the Gray Fossil Site is, red-eared sliders are particularly common.

Slider turtles live in wetlands, which can be especially threatened by pollution or habitat destruction due to human activities. If their ponds become unsuitable for living, these turtles often have nowhere else to go. Most sliders are not considered Endangered, but some are considered Near Threatened or Vulnerable, such as the Puerto Rican and Hispaniolan sliders of the Caribbean.

This video provides an overview of our scientists' understanding of the slider turtles at the Gray Fossil Site.