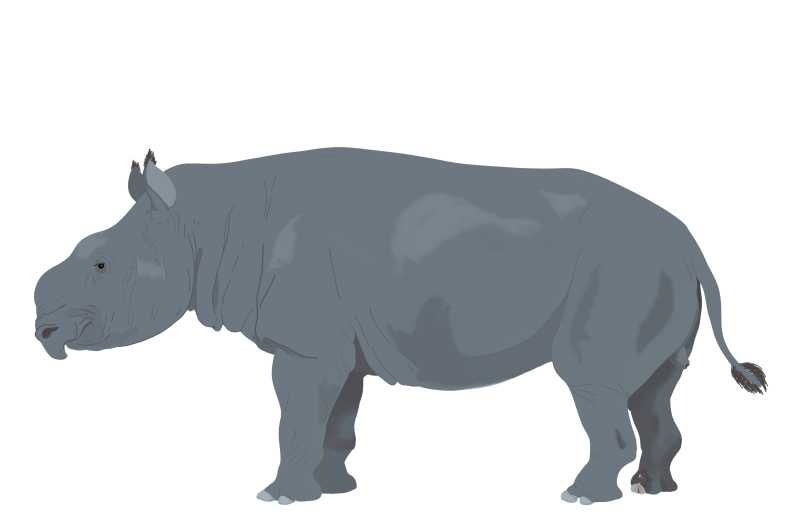 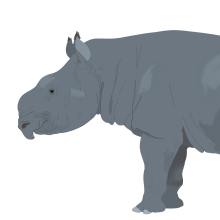 These rhinos are some of the largest animals found at the Gray Fossil Site. Like modern-day rhinos, they had big bodies and thick skin. As adults, these rhinos would not have had to worry about many predators, but paleontologists have found fossil remains of not only adults, but also babies! Baby rhinos probably stayed close to their mothers. The ancient forest of Gray would have been a good place to find shelter and food.

These rhinos belong to an ancient group called barrel-chested rhinos, which are all extinct. Most species in this group lived in grasslands and ate mostly grass, but the Gray Fossil Site species lived in the forest. Most rhinos, living and extinct, live in habitats with warm climates. These conditions are good not only for the rhinos, but also for the plants they eat.

Paleontologists have studied the shape and structure of these rhinos’ teeth, and they’ve discovered that the Gray Fossil Site rhinos were browsers, eating mostly leafy plants. The Gray Fossil Site rhinos are also slightly taller than other barrel-chested rhinos, which might have helped them reach a little higher for tasty leaves. The forest of ancient Gray was home to many types of plants, including oak, hickory, and pine trees. When it was time for a drink, the rhinos could use the ancient pond of Gray as a watering hole. Maybe they also took mud baths like modern rhinos!

Rhinos belong to a group called perissodactyls, which also includes tapirs and horses. There are five species of rhinos living today in the forests and grasslands of Africa and southern Asia. The living species are white rhinos, black rhinos, Sumatran rhinos, Indian rhinos, and Javan rhinos.

All living rhino species are threatened by human activities. The rhinos’ habitats are disappearing or changing as humans alter forests and grasslands to use for farming or construction. Rhinos are also commonly hunted by poachers for their horns or other body parts. Black rhinos, Sumatran rhinos, and Javan rhinos are all considered Critically Endangered.

This video provides an overview of our scientists' understanding of the extinct rhinos at the Gray Fossil Site.