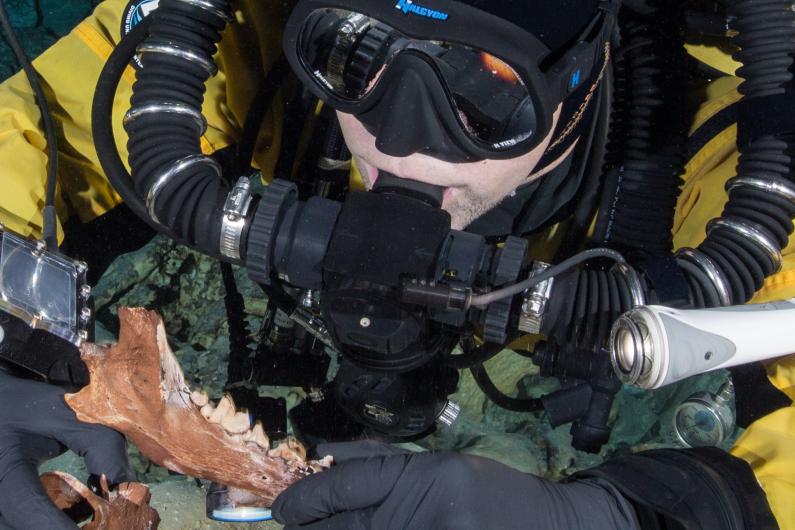 In a deep pit inside an underwater cave in the Yucatán Peninsula of Mexico, paleontologists have discovered the fossils of two unexpected carnivorans, a bear and a wolf-like predator which were once thought to have lived only in South America. Fossils from Middle America are rare, and these ancient predators help shed light on the history of animal evolution and migration through the region.

Starting around three million years ago, South America connected to North America after tens of millions of years of isolation. This led to the Great American Biotic Interchange, when northern animals moved south and southern animals moved north. These dispersals occurred in pulses associated with waxing and waning glacial periods and rising and falling sea levels, gradually laying the foundation for the ecosystems we see in the Americas today. But fossil sites in Middle America, where the exchange actually took place, are very rare.

Hoyo Negro, a deep pit within the enormous Sac Actun cave system, is one of these rare sites. Between around 38,000 and 13,000 years ago, during the Late Pleistocene Epoch, the pit acted as a trap, collecting the remains of animals that fell in while wandering through the caves, including ground sloths, elephant-like gomphotheres, tapirs, sabertooth cats, and even the famous skeleton of Naia, the most complete early human in the Americas.

By 10,000 years ago, the entire cave system was flooded by rising water levels, leaving many of the fossils submerged more than 30 meters under water. These conditions have made Hoyo Negro a difficult-to-reach fossil site that is absolutely worth exploring for its bounty of beautifully-preserved fossils.

In a study published in Biology Letters, researchers describe two carnivoran species from Hoyo Negro: Protocyon troglodytes, a large relative of coyotes and wolves, and Arctotherium wingei, a small species of short-faced bear and currently the only bear known from the Yucatán Peninsula. Both of these extinct species have only ever been found in South America, and their discovery in the Yucatán extends their known range by more than 2,000 kilometers!

Some ursids (bears) and canids (wolves and their relatives) moved into South America from North America during the Interchange, but the fact that these two South American species were living in the Yucatán at the end of the Ice Age suggests their history of movement was more complicated. There are many unanswered questions about the timing and patterns of migration during the various phases of the Interchange, and the researchers are hopeful that further expeditions to Hoyo Negro and other similar sites will lead to long-awaited answers.

Recovering and researching these fossils was an international effort. Dr. Blaine Schubert, lead author on the study and professor of Geosciences at East Tennessee State University, was brought onto the project for his experience with cave paleontology and American carnivorans. But once he noticed South American species among the fossils, he explains, “it became important to get researchers involved from South America that were more experienced with these animals.”

The full team of researchers ultimately included scientists from East Tennessee State University, as well as others from California, Washington, Argentina, and Mexico. The Instituto Nacional de Antropologia e Historia (INAH) in Mexico is integral in managing the fossil site and the fossils themselves. “We’re talking about the American interchange here, so we also have an interchange of scientists!” says Schubert.

It was also essential to get expert divers involved. “I’m a diver. I’m a caver. But I’m not a cave diver… not even close,” Schubert notes. The diving team was composed of highly trained technical divers who travel through the horizontal passages and down into Hoyo Negro itself to document fossil remains in the pit. From images, researchers make digital models of the site, pick which fossils they want collected, and send the divers back in to gather them. Diving into a pitch-black underwater cave surrounded by tropical jungle is not at all the classic image of paleontology.

For ETSU paleontologists, Hoyo Negro is also an intriguing comparison with the fossil site in their own backyard, the five-million-year-old Gray Fossil Site in East Tennessee. The Gray Site was also a cenote that opened up in a warm forested region, and it even shares some animals with Hoyo Negro, including tapirs, ground sloths, and a much earlier species of short-faced bear. “There may have been a time where you could have put on scuba gear and gone into the Gray Fossil Site cave system,” Schubert says.