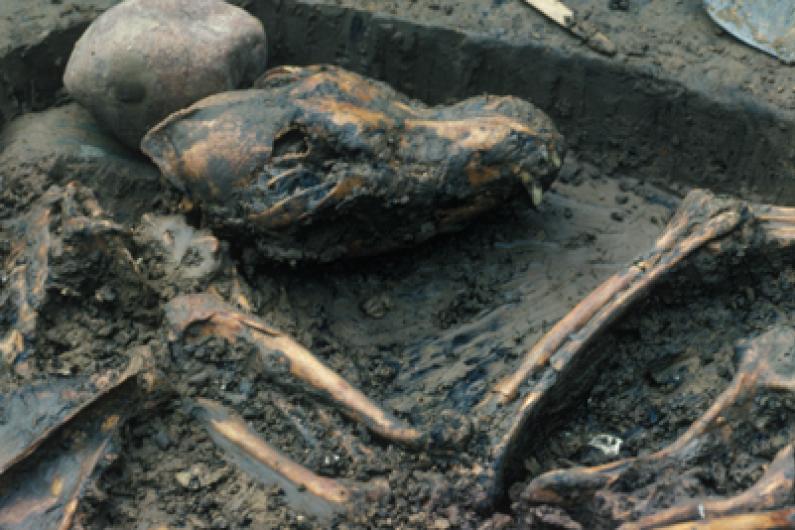 The oldest known domestic dogs in the Americas lived in Illinois 10,000 years ago

Dogs were first domesticated in Eurasia by around 16,000 years ago. As human groups colonized the Western Hemisphere, dogs followed, giving rise to unique native American dog populations which ultimately vanished after the arrival of Europeans. But very little is known about the earliest American dogs. In a recent study published in the journal American Antiquity, researchers took a new look at three ancient dogs from central Illinois: two from the Koster site in Greene County and one from the Stilwell II site in Pike County.

“The Koster dogs had been written about a lot since their discovery in the 70’s, but the Stilwell dog was virtually unknown aside from a few mentions in some old literature,” says Angela Perri of Durham University, UK and lead author of the study. Domesticated dogs are often difficult to distinguish from wild canines such as wolves in the archaeological record. But these specimens not only display characteristic dog traits, they were each buried in individual pits by their human partners.

These skeletons have long been considered among the oldest dogs in the Americas, but had not been directly dated before this study. Perri and colleagues radiocarbon dated these animals to around 10,000 years ago, establishing these as the oldest securely-dated domesticated dogs in the Americas. They are also the oldest known individual dog burials in the world.

Further analyses paint a detailed picture of the lives – and deaths – of these dogs. They stood as tall as an adult human’s knee, and the wear and tear on their skeletons suggests they were living active lifestyles. The isotopic signatures of their bones indicate they were fed a similar diet to local humans of the time, including a significant amount of freshwater fish. And the fact that they were carefully buried suggests they were important companions to early Americans.

“These weren't lap dogs, they had clearly defined roles in human society.” says Chris Widga of East Tennessee State University, one of the study’s co-authors. “By focusing on the lives of these animals, we get to look through a dog-sized window on human groups 10,000 years ago.”

At that time, central Illinois was colder and more forested than it is today, and humans were still relative newcomers. The oldest human remains in North and South America are around 14,500 years old. Canine companions may have been essential to early human occupation on these continents.

“Dogs may have assisted these populations by facilitating movement, acting as hunting aids, and protecting against late Pleistocene megapredators,” says Perri.

Many questions remain and the researchers have their sights set on other American dog remains that may be of similar age or even older than the Koster and Stilwell dogs. They are hopeful that more specimens can shed further light on the story of American dogs: when they came over, how they diversified, and why they ultimately vanished.