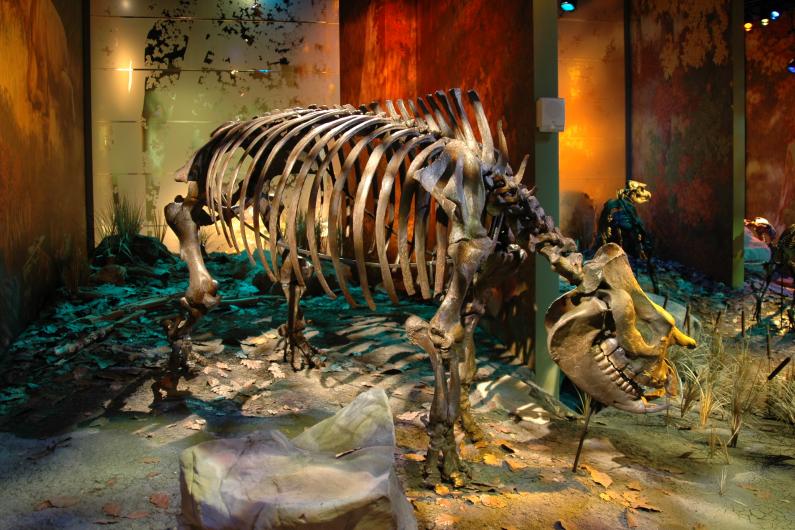 A surprising new species of rhino from the Gray Fossil Site, Tennessee

The Gray Fossil Site in East Tennessee preserves the remains of a diverse ecosystem dating to a time called the Late Hemphillian Stage and home to tapirs, alligators, mastodons, red pandas, and more. Now, a study published in the Bulletin of the Florida Museum of Natural History unveils the latest new species from the site, a rhinoceros named Teleoceras aepysoma. At an estimated 4.5-4.9 million years old, these were among the very last rhinos in North America.

The new species is a member of a group called the barrel-chested rhinos, which were once widespread across the plains of North America. They were typically grass-eaters, and they looked sort of like hippos, with short legs, round bodies, and a nose adorned with only a very small horn or no horn at all. But the Gray Fossil Site rhino is very different.

“If you put it in a group of other Teleoceras species, it would be like the NBA player. It would be noticeably taller and larger,” says Rachel Short, lead author of the new paper and PhD candidate at Texas A&M University. One of the major distinguishing features of the new species is its long front limbs, which gave it a height boost not seen in its cousins. In fact, the name aepysoma means “high-bodied.”

This “high-bodied” rhino was also living an unexpected lifestyle compared to its relatives. The ancient habitat of the Gray Fossil Site was not a grassy plain, but a dense forest, and previous chemical analysis of this rhino’s teeth has shown that it was browsing on leaves, not grazing on grass. Short suspects it’s no coincidence that this unusually-shaped rhino was living in an unusual place. The extra height of T. aepysoma may have been a helpful adaptation while it competed for leafy greens with smaller herbivores like tapirs.

The detailed description of this new species was possible thanks to the amazing preservation at the Gray Fossil Site. While most extinct species are known only from fragmentary remains, T. aepysoma is represented by two practically complete skeletons, affectionately named Little Guy and Big Boy, as well as partial remains of at least four others. Little Guy, who is identified in this paper as the reference specimen or holotype for the species, has every single bone in the body except for one missing toe bone!

This fossil bounty allowed the researchers to present what they describe in their study as “a detailed, thorough, bone-by-bone description” of the rhino. “I feel like this is practically going to be a rhinoceros reference manual,” says Laura Emmert, study coauthor and Field and Lab Technician at the Gray Fossil Site. Short and Emmert both graduated from the East Tennessee State University Master’s program in Paleontology in 2013.

Partial rhino remains were first found at the Gray Fossil Site in 2000, and from 2004 to 2006 paleontologists discovered and excavated the full skeletons of Little Guy and Big Boy. “It was almost immediately that we started noticing these weird differences, especially in the legs,” says Dr. Steven Wallace, study co-author and professor of paleontology at ETSU. “Once we got the skull together, we noticed the skull was weird, too.”

But it wasn’t until Short started her Master’s research in 2011 that the rhinos finally got the academic attention they were waiting for. Then it was a matter of meticulously examining each bone and comparing them to rhinos around the country. The researchers suspected all along that this was a new species, and with the publication of this paper, it’s official.

“I’ve been working on these rhinos for almost eight years,” says Short. “To have it done now is very satisfying and I’m excited to contribute to our understanding of North American rhinos.”