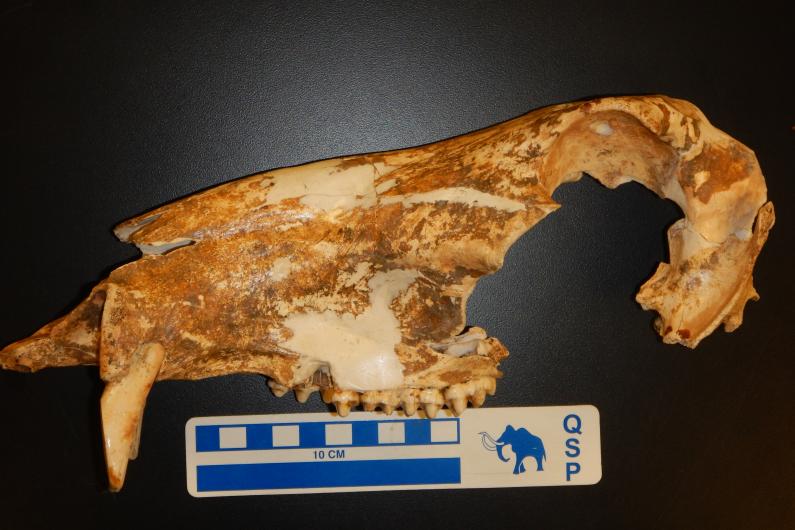 Thanks to an abundance of fossils in Bat Cave, Missouri, paleontologists have been able to interpret seasonal social habits in the extinct flat-headed peccary, which lived tens of thousands of years ago during the Late Pleistocene Epoch.

The research, published in the journal PeerJ, was conducted by Aaron Woodruff, a graduate of the East Tennessee State University Master’s program in paleontology and assistant collections manager at the Florida Museum of Natural History, along with his past advisor Dr. Blaine Schubert, professor of Geosciences and director of the Center of Excellence in Paleontology at ETSU.

Peccaries are pig-like animals native to the Americas. There are three living species and an extensive fossil record of ancient species going back millions of years, including the flat-headed peccary, Platygonus compressus. Flat-headed peccaries were once widespread across North America, and their fossils are particularly common in cave sites. This has led paleontologists to wonder if these extinct peccaries gathered in caves for shelter in the winter like living peccaries sometimes do.

Back in the 1960s, a group of researchers recovered a sizeable collection of fossils from Bat Cave in the central Ozark plateau in Missouri, including the remains of at least 73 individual flat-headed peccaries. These fossils came to be housed at the Illinois State Museum and were more recently loaned out to ETSU for study.

To investigate how these peccaries were using the cave, the researchers examined the development and wear on the peccaries’ teeth to determine the ages of the animals that once died there. “I got the idea to examine the age distribution one day when I was looking at the lower jaws I had lined up,” says Woodruff. “I realized that different individuals appeared to be in the exact same stage of tooth eruption.”

These peccaries don’t show a continuous range of ages, but instead fall into distinct groups of individuals at roughly the same life stage, with nine to twelve months of age separating each group. Woodruff and Schubert suspect that these ancient peccaries, like their living cousins, were operating on seasonal cycles, giving birth to young in the spring and sheltering in the cave in the winter. This would explain why the cave was only capturing their remains during specific stages of their lives.

Similar patterns have been found in other Ice Age animals, such as bison, but this is the first evidence of seasonal behavior patterns in a fossil peccary species.

“Though Platygonus is one of the most common late Pleistocene mammals from fossil sites, we know little about this species and how it lived,” says Schubert. “This research answers questions about their paleobiology that we have only wondered about before.”

This study also revealed that most of these peccaries were young, between one and four years of age. At ages five and up, they become less and less common, with only one nine-year-old peccary identified. This is also similar to modern peccaries who tend to struggle to survive as they get older and face issues like arthritis and tooth wear.

Woodruff is hopeful that this research will be extended beyond Bat Cave in the future. “Flat-headed peccary fossils are well known from cave deposits around the country and multiple individuals are typically represented. Similar patterns may potentially be found at these sites as well.”