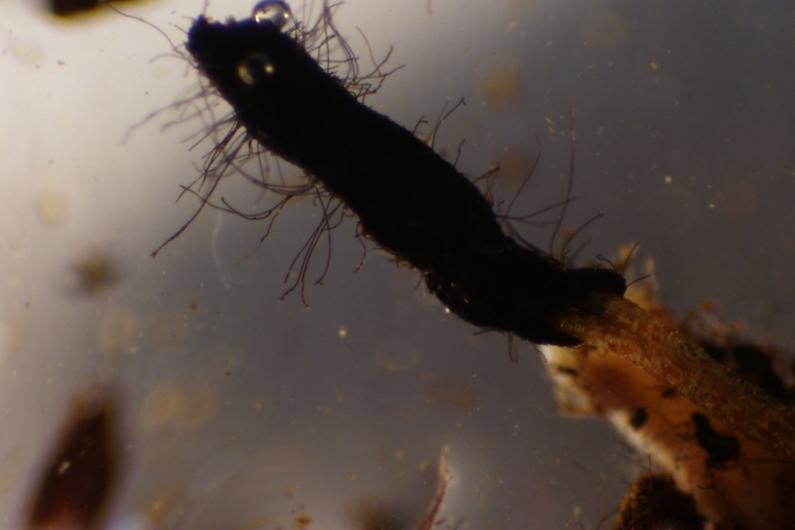 Years ago, researchers put the dark clay of the Gray Fossil Site under the microscope to explore the ancient environment of Gray, Tennessee, around five million years ago. They were looking for pollen, but also came across other forest inhabitants, including fossil fungi. While the pollen became the subject of a 2013 study investigating the ancient plants of the fossil site, an analysis of the fungi has now been published in the journal Mycosphere. Normally, when we think of fossils, we imagine hard, durable things like bones, teeth, shells, or seeds. But in the right conditions, even softer and rarer fossils may be preserved, and the conditions of the Gray Fossil Site are exceptional.

Dr. Liu and his international collaborators Drs. Grzegorz Worobiec and Elzbieta Worobiec of the Polish Academy of Sciences in Krakow found preserved bits of mycelium (the branching, root-like fungal bodies that grow underground) and fruiting bodies (the fungal reproductive parts that often stick up above ground as mushrooms or similar structures). All of these remains are between 0.05 and 0.2 millimeters long.

The researchers were able to identify three extinct types of fungus. At least one was probably growing on dead wood, which would have been abundant in the forested environment of the Gray Fossil Site. At least one other fungus was mycorrhizal, which is to say it grew in a symbiotic relationship with plant roots. The fungal fossil record is rarely studied and not very well understood. Two of the fungi identified in this study are the first of their kind found in the fossil record of North America.

Paleontologists often look to the tiniest of fossils, including pollen and fungus, to interpret prehistoric environmental conditions. Based on living fungal relatives, the researchers suggest that some of the Gray Fossil Site fungi would have required high humidity and precipitation to thrive, which is a good clue that this ancient habitat was fairly warm and wet, at least during part of the year, an interpretation that has also been proposed based on other plant and animal findings at the site.

“Fungi are an inevitable component in any ecosystems,” says Liu. “Better understanding of the ancient diversity and ecology of fungi at Gray will contribute to our holistic appreciation of life and evolution in the Appalachians, Southeast U.S., and beyond.”