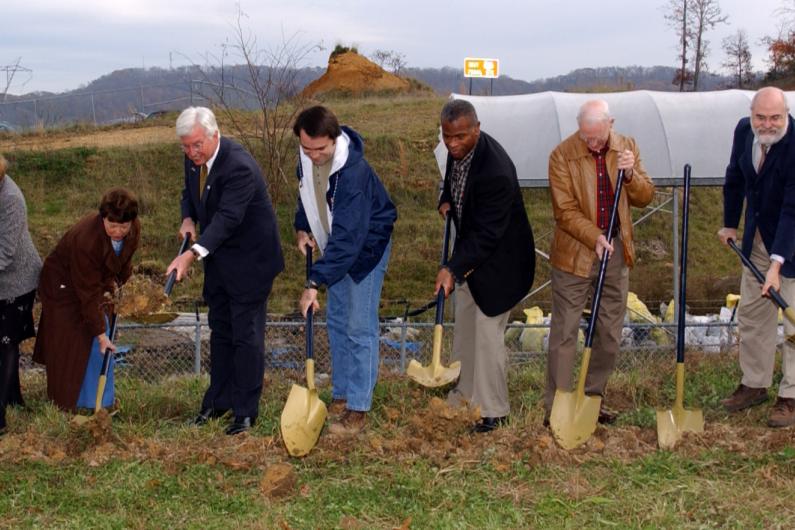 The Gray Fossil Site and Paleontology at ETSU

In late May of 2000, fossils were discovered during a Tennessee Department of Transportation (TDOT) road construction project on the outskirts of the town of Gray in Washington County, Tennessee. It soon became apparent that the site was extremely rich with fossils unlike any known from the region, so a concerted effort of TDOT employees, researchers from the University of Tennessee Knoxville, and the TN State Archaeologist sought to protect and preserve the site. On August 7th of that year, Tennessee Governor Don Sundquist and other state officials visited the site for a first look, and during a second visit on September 15th, the governor announced that the road project would be relocated to save the fossil site for research and education.

Through the leadership of Dr. Paul Stanton, then President of East Tennessee State University (ETSU), the Gray Fossil Site (GFS) became an ETSU project. In 2001, the University hired paleontologist Dr. Steven Wallace to head up excavations and research. In September of 2002, Governor Sundquist announced an $8 million Federal Highway Administration grant to ETSU for the development of a museum and visitors center at the site, with an additional $2 million match provided by ETSU. The museum thus began as a $10 million investment in scientific education and outreach in East Tennessee.

Shortly after the funding announcement, ETSU founded the Don Sundquist Center of Excellence in Paleontology with Dr. Wallace as director. The primary responsibilities of the CoEP, via the College of Arts and Sciences, included museum development and planning; fossil prospecting, excavation, and research; university education; and public outreach.

During these early years, Gray Fossil Site excavations and fossil preparation continued to reveal the unique and diverse nature of the fossil deposit. In 2004, researchers published an overview of the fauna, flora, age, geology, and paleoecology of the site in the journal Nature. That same paper also introduced two extinct species new to science: a badger and a red panda. This unique Appalachian panda, the first panda ever found in the region, was named Pristinailurus bristoli after Larry Bristol, who found the first panda tooth and who was heavily involved with GFS outreach. This early publication in Nature brought international attention and interest to the site, and was only the beginning of the scientific discoveries that attest to the significance of the GFS. 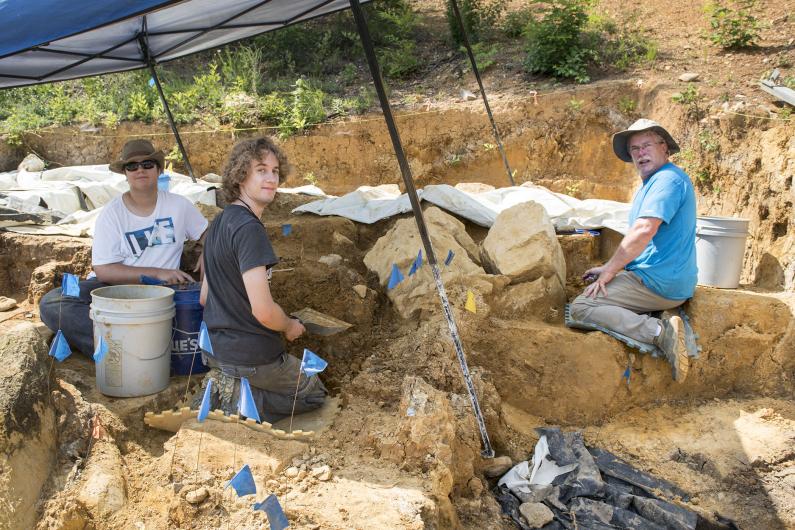 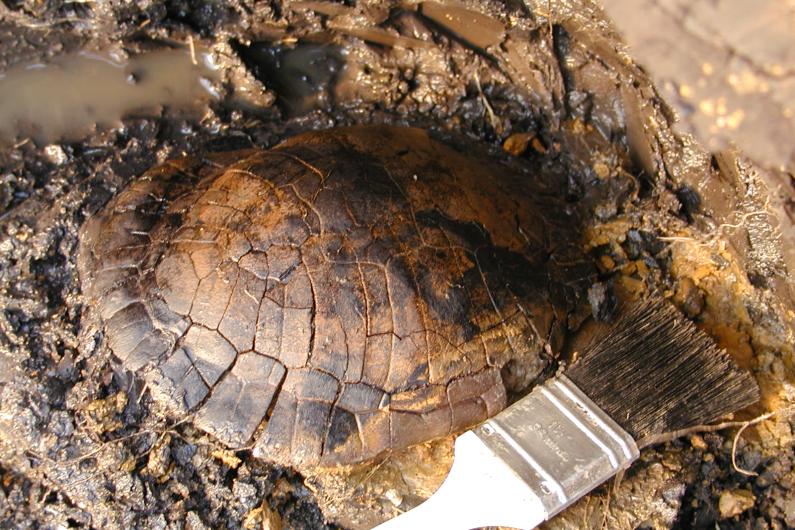 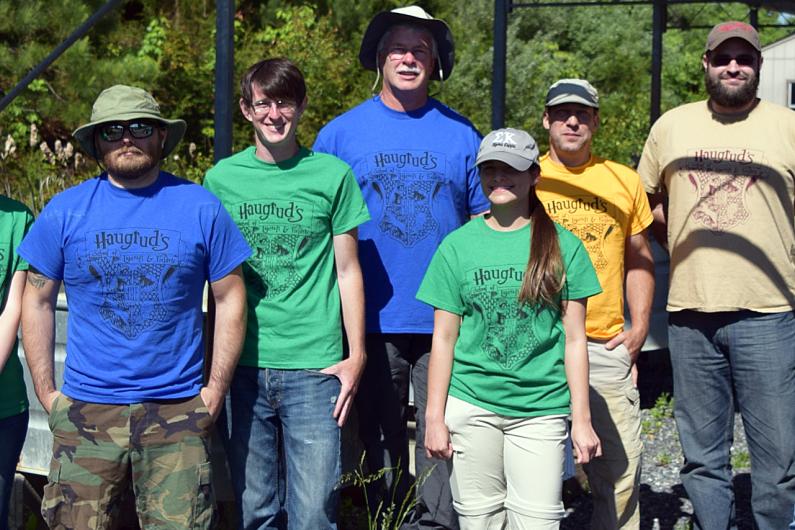 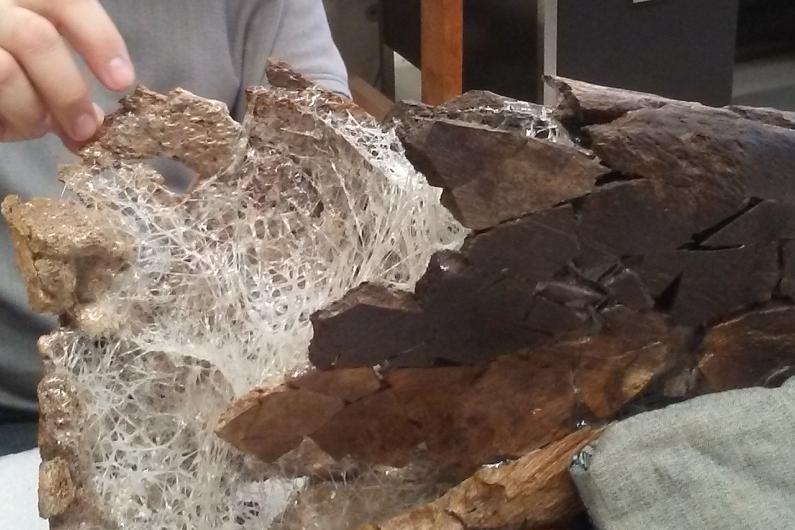 By 2004, the paleontology contingent at ETSU had grown and was continuing to attract students and researchers. Geologist Dr. Mick Whitelaw had joined the ETSU faculty in 2003 and began work on paleomagnetism and stratigraphy of the site, as well as developing paleontology outreach programs for grade schools. Numerous volunteers and students had joined in helping with excavations and lab processing and signing up for paleo-related classes or field trips. In the fall of 2004, Dr. Blaine Schubert was hired as a postdoctoral fellow to assist in museum and exhibit planning, help manage volunteers and staff, teach classes, and oversee the organization of the growing fossil collections.

For most of 2005 and 2006, ETSU paleontology focused primarily on museum development operations, excavations, laboratory processing, and curation of fossils. In the fall of 2006, the paleontology group grew considerably with the hirings of Ms. Jeanne Zavada as Museum Director, Dr. Michael Zavada as the Chair of Biological Sciences, Dr. Yusheng (Christopher) Liu as a faculty member in Biological Sciences, and Dr. Blaine Schubert as a faculty member in what was then the Department of Physics, Astronomy, and Geology. In the 2006-2007 academic year, the Museum and Center defined separate roles and became distinct entities within the College of Arts and Sciences. In late August of 2007, the 33,000 square foot museum opened to the public and was officially named the East Tennessee State University and General Shale Brick Natural History Museum and Visitors Center at the Gray Fossil Site.

In the fall of 2008, Dr. Jim Mead became the Chair of the newly developed ETSU Department of Geosciences. Along with Dr. Mead came thousands of skeletal specimens for research and teaching, as well as an extensive paleontology library of books and articles. With a new department, a new Chair, and a new collection of educational assets, a Master’s of Science in Geosciences with a concentration in Paleontology was developed.

In 2009, with its original mission and goals accomplished, the CoEP set out to accomplish new goals. Over the following two years the Center successfully established an active foundation account for research and education, continued cultivating a stronger relationship with the Museum, developed a website, hosted a Gray Fossil Site Symposium, obtained a large NSF grant for research (PIs: Wallace and Schubert), and published a book on GFS research in 2010.

Early 2012 saw a change in the organizational structure of the Museum and Center, with the Museum becoming a component of the Center. At this time, the Museum began developing a strategic plan for growth, development, and sustainability, and in 2013, the CoEP established a path forward document for the Museum. This development plan relied on increased funding and staff to become a fully operational natural history museum and science center.

In 2016, ETSU entered into a partnership with the Hands On! Regional Museum from downtown Johnson City. Hands On! began the process of relocating their staff and operations to the GFS, sharing physical space with the ETSU Gray Fossil Site & Museum and taking on the responsibilities of marketing, front desk operations, new exhibits, ticket sales, on-site programming, the gift shop, and general tours. By June of 2018, Hands On! had closed their downtown location and opened as the new Hands On! Discovery Center at the Gray Fossil Site, now with new exhibits and a close relationship with the museum.

This same year, Dr. Jim Mead retired from ETSU and took a position as Science Director at the Mammoth Site of Hot Springs, South Dakota. In his time at the University, Dr. Mead had been instrumental in working with the CoEP as a curator and researcher, and his partner Sandy Swift had served as a volunteer collections manager for the zoological comparative collection and paleontology library since they came to ETSU in 2008. Dr. Mead was also integral in developing paleontology concentrations for the Master’s and Bachelor’s degrees in Geosciences, as well as a paleontology minor. Upon their departure, the pair donated to the Center the majority of the zoological collection and the library, which was subsequently named the Mead Library. More recently (2018-2019), Dr. Mead and the Mammoth Site have been collaborating with the Museum and Hands On! to develop joint internships for students and to share ideas for public interpretation and outreach.

Over the past few years, the partnership with Hands On! has allowed the Center to focus more on research, student training, excavations, discovery, caring for our growing collections, exhibit development, adult education, and outreach. Two additional positions were added to the museum in 2016-2017 for Dr. Chris Widga as Head Curator and Keila Bredehoeft as Museum Specialist. Dr. Josh Samuels was also added as a new faculty member in the Department of Geosciences and serves as a curator at the Museum. Dr. Whitelaw also now serves as a faculty curator, while Dr. Wallace serves as faculty curator and Director of Field Operations for the Gray Fossil Site. 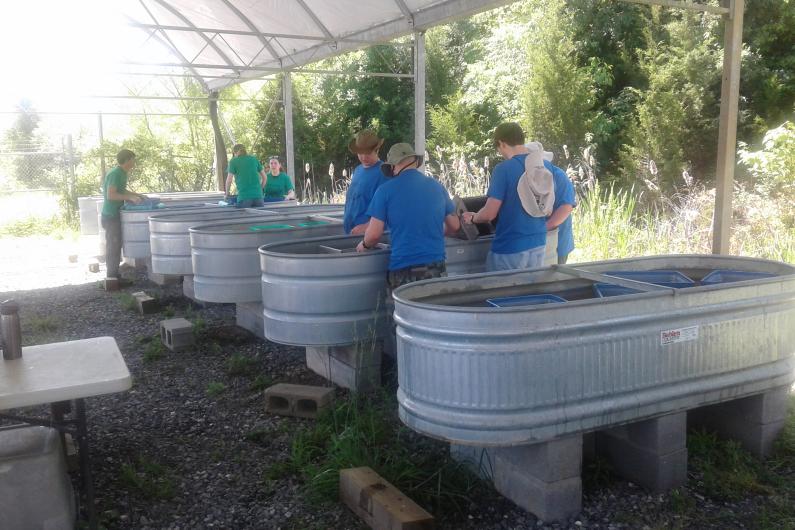 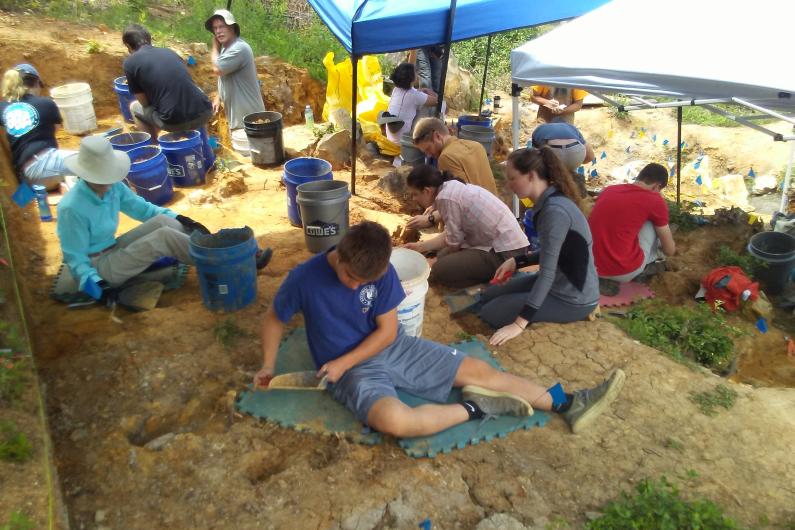